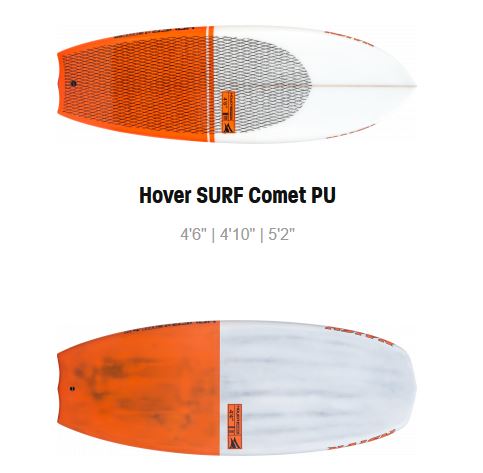 Be the first to review

Prone foiling is taking off big time and Naish as usual have all the gear to offer.

Who is it for?
These boards are for surfers who want easy paddling and control while foil surfing.

What does it do:
Hover Surf Comets easily glide into waves and offer direct foil control.

Year after year, foil surfing has continued to rapidly evolve and grow. Matching the pace of the evolution has been the Hover Surf Comet. Surfers accustomed to riding a shortboard will appreciate its narrower width for easy paddling.

For 2020, two new smaller sizes have been added with a 4’6” and 4’10” joining the 5’2”. These shorter lengths greatly reduce swing weight and give unmatched control when foiling.

Not to neglect the ability to catch even the smallest of waves, these shapes have ample volume with a wide tail that make catching waves and popping up easy and stable. For added paddle power, the rocker is refined with a slightly straight mid section and added nose rocker.

The concave deck also makes paddling more comfortable and naturally guides your feet to the center of the board when popping up.

Two 10” US fin boxes contribute to the boards versatility allowing users to position the foil exactly where they want it based on ability or size.

For surfers who want the outline, nose shape and paddle power of their traditional shortboard when foiling, the Hover Comet blends traditional feel with futuristic performance.

Who is it for?
Hover Surf Ascends are for surfers who want a compact foilboard with plenty of volume.

What does it do?
These boards paddle comfortably, take off easily and have minimal swing weight.

Why is it unique?
Hover Surf Ascends are super compact yet still has plenty of volume to catch waves with ease.

What’s new?
The rockerline is flatter for increased paddle power.

While the Hover Surf Comet echos a traditional surfboard silhouette, the Hover Surf Ascend packs more volume per inch (in height). Wider than our Comets, with a more square and parallel outline, the Ascends pick up even the tiniest waves with little effort. The concave deck section is not only more comfortable when paddling, it is also a “self centering” feature when popping up—guiding the feet into the ideal position in relation to the foil.

Building from the success of the previous year, the 2020 model has been refined with new sizes and adjusted specs. The overall outline is more parallel for better stability while paddling and take off. The new 5’4” and 5’8” sizes also feature slightly narrower widths for better efficiency while paddling. A new rockerline with a flattened nose entry for increased paddle power also contributes to these boards ability to catch waves with ease.

Shaped with pure foiling performance in mind, the Ascend range features beveled rails running from nose to tail. These smooth the transition while getting up onto the foil and allow you to carve hard without catching rail.

If catching small waves early and getting to your feet quickly is the key to surf foiling, the Hover Surf Ascend
unlocks the ride easily and intuitively. The Hover Ascends are recommended for riders who are looking for a
dedicated design that allows them to go shorter (in consideration of volume) without sacrificing paddle ability.

There are no reviews yet.